When Did I Decide To Write A Book?

When did I decide to write a book?

Since I started Broken Mortals my Dad keeps asking me when I decided to write a book. So I started thinking back through my years as a reader and thought I would put some thoughts down.

For those of you who have read my blog you know that my grade two teacher Miss Gleddie was the lady who inspired me to read by telling my parents to buy me comic books. That was the beginning of my desire to be a writer. I drew hundreds of comic books, I made sketches and drawings and storylines of hundreds of comics.

Another significant moment of inspiration came when Miss Gleddie read to us from Mordecai Richler’s Jacob TuTu meets the Hooded Fang. I loved that book. She would read it to us during story time and it was the only book that I can truly remember being excited to hear.

Somewhere in grade 5 or 6 I was introduced to Gordon Korman who wrote his first book when he was 12 years old. I wanted to be him. Yet writing a book seemed impossible when I was 12.

In Junior High and Senior High I was absolutely obsessed with J.R.R Tolkien’s various writings, anything about the End Times and comics. Lots of comics. G.I.Joe, X-men, Spiderman, The Fantastic Four, I was obsessed with everything Marvel. I did attempt to write numerous stories back then but nothing ever amounted to anything. I often told myself if I ever write anything it will be how the End Times will actually happen because at 13 years old I figured that I knew everything about the book of Revelation. I was wrong I still could not write that book.

Mr. Sheets was my English teacher in High School and he seemed to love my writing. Whether it was poems, or essays, or stories. Anything I turned in got excellent grades. Writing for me was effortless. In high school I was convinced that at some point in my life I would write a book.

In Bible College writing became a chore and no longer easy, it was laborious and exhausting. There was so much reading and so much writing and that ruined the fun for me.

When I got into youth ministry I built most of my own curriculum because in small town Saskatchewan it was hard to find cheap material. All the stuff from the big publishers was very American and militaristic. A lot of it seemed to focus on behaviours that Christians considered bad and not about simply following Jesus in a way that a student could grasp. So I began writing my own.

That process is what starting me blogging because I realized that I had already built a ton of curriculum. I decided I might as well start capturing it on my blog.

At some point in my youth ministry one of my Executive pastors informed me, “Quickstarts always say that they would like to write a book, but they never do because it takes too long.” It was after that conversation that I decided that I should really start compiling my writings into a book, just so I could prove him wrong.

Unfortunately, that statement did prove true for many years after that because I was too busy at Beulah to actually sit down and bang out some chapters. It wasn’t until I quit that I had the time but… I was in shock, and heartbroken and struggling financially. So I didn’t write.

Then, I happened to get introduced to a Podcast called “Don’t Keep Your Day job” by Cathy Heller. As I immersed myself in her message of “Get out there and do that thing that you keep putting off because the world needs you to do it” I started to believe that I could do it. Somehow, that podcast actually inspired me to take the book process seriously and I began the task of collecting my talks and building what would eventually be the skeleton for Broken Mortals.

When did I decide to write a book? Probably the dream started in grade 2 in Miss Gleddie’s class.

I’m now 44 years old and have finally achieved that dream. 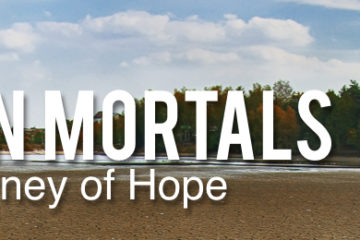 Broken Mortals: A Journey of Hope

Broken Mortals: A Journey of Hope I am excited to announce that my book is in its final stages of development. I’ve always wanted to write this book. Once I started preaching I knew I Read more…